Although not illuminated by red lights or marked by scantily clad women standing on street corners, York Region faces the disturbing and worldwide problem of human trafficking for sexual exploitation.

According to the York Regional Police Drugs and Vice unit, there have been 18 reported cases of sexually exploited trafficked women in the region since 2009.

According to the U.N., human trafficking is the exploitation of a human being and, every year, thousands of men, women and children globally, fall prey to traffickers. In Canada and York Region, victims of traffickers are not smuggled across borders, said Detective Rebecca McGregor, but come from small towns and different regions.

Since 2007, Canada has had 111 reported cases of Canadian females and children being trafficked, said Detective Constable McGregor. 90 per of those were domestic.

Inspector Keith Merith, who introduced the presentation, said a switch in practice in 2008 has made the YRP progressive in combating trafficking and assisting the victims. He also said the police had made a mistake with their previous policy.

“Looking back, we had it wrong. We did it wrong,” he said. “We saw victims [prostitutes] back then as willing participants in the matter. Looking back, we made a critical error in the way we were policing.”

Det. McGregor noted that no one should think that this could never happen to them or someone they know. Anyone can be a victim. However, traffickers prey on girls with vulnerabilities.

“Low self-esteem, the need to be loved, or from a broken home and looking for a better life, are all vulnerabilities preyed upon by predators,” she said. “Even girls in schools can be seeking money to continue their education.”

After luring girls into thinking they are loved, or showering them with gifts, they isolate them from their family and community and begin the abuse and exploitation. The average age of entry into prostitution in York Region is between 14-16 said Detective Truong.

While a horrendous violation of human rights, trafficking is a difficult matter to investigate and police, said Det. Truong. During the presentation, a surveillance video was played in which a trafficked woman fled her captor. Not shown on the screen, was a police car parked in an adjacent lot, opposite from where the women fled.

“As investigators, we know what to do when someone calls 911 and says ‘I need your help,” said Truong, but its complicated when the case is a trafficked person. “We know she is a victim, but she is not calling us or her community or coming into a police station.”

Suniana Mannan, a social worker with the Women’s Support Network of York Region, says it is still unclear how the police will approach trafficked prostitutes and this leads many to avoid them.

“It is not clear enough on how, or if, they will charge sex workers,” said Ms. Mannan. “This means more people are going to networks as opposed to the police.”

McGregor said that courts are starting to recognize that girls facing prostitution charges were vulnerable and that it was the pimps who were preying on them. However, it remains difficult to tackle. “We have an uphill battle in our communities of trying to offer assistance to some of these girls and some of these victims,” she said.

Seeking a cheap and low-risk place to do business, many pimps use hotels as venues. Signs such as consistent refusal of maid service, a third-party checking in, limited personal belongings and frequent requests for fresh towels are signs which the police say may indicate prostitution is taking place. 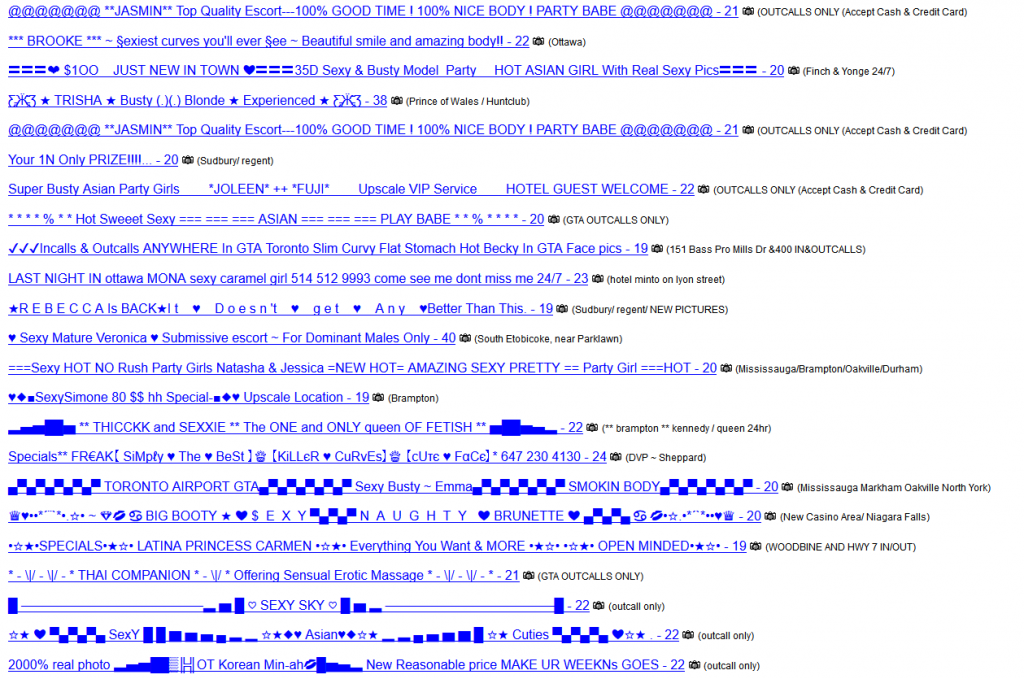 “We are a very aggressive team. We go out looking for our victims,” said McGregor. “Our victims don’t come looking for us, we actively look for our victims.” The police look for violent pimps and juveniles, taking the pimps into custody and rescuing the victims.

The Women’s Support Network fights to reduce and prevent sexual assault of women in York Region, said Ms. Mannan. They launched an anti-trafficking project in 2011 and have received 40 calls from women being trafficked in the Region.

Their 24/7 crisis line puts women in touch with legal support, employment, medical care and immigration help. “Education is huge as a lot don’t have high school diplomas or any work experience,” said Ms. Mannan. “Because the age of targeted girls is so young, they miss out on the education and experience requisite for any sort of employment.”

The network’s next step is forming an advisory group from women who have escaped trafficking and are looking to help others and move forward.