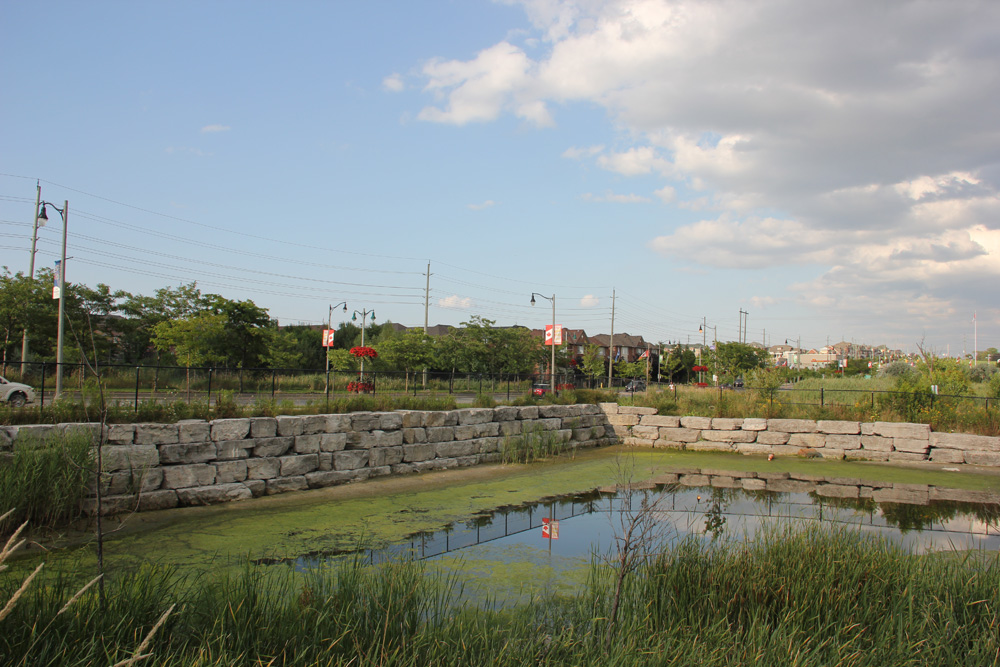 A recently upgraded stormwater pond at the corner of Wellington St. and Mary St. in Aurora

Aurora is “ahead of the game” when it comes to protecting the source waters of Lake Simcoe, as it moves to conduct a new stormwater master plan.
The Town will be building upon a previous plan it conducted a number of years ago, before it was mandatory to do so.

In accordance with the 2008 Lake Simcoe Protection Act, Aurora is preparing a comprehensive stormwater management plan that can be implemented before June 2, 2014. According to the Town, the long range planning approach will enable Aurora to identify opportunities and be proactive in addressing stormwater management issues.

While the town is located almost 25 km from southern Lake Simcoe, pollution and contaminants generated in Aurora can easily migrate northwards to the lake.
“Aurora is at the headwaters of a lot of streams that go into the south side of Lake Simcoe,” said Ilmar Simanovskis, Aurora’s Director of Infrastructure and Environmental Services. “Ninety-five per cent of the water which lands in Aurora, goes north.”

The natural cycle of drainage, where rain is absorbed into the ground, is altered when houses, roads and parking lots are constructed. The water which would have normally drained into the ground, now needs to be diverted to water bodies. However run-off from rain, snowmelt, car washing and lawn irrigation which enter storm drains, can negatively impact the hydrological cycle in a number of ways.

The purpose of stormwater management, is to control the quality and quantity of runoff water which is discharged into creeks, streams and lakes, said Mr. Simanovskis. “One method of dealing with run-off, is a stormwater pond which regulates flow so systems and pipes are not overwhelmed or damaged,” said Simanovskis. “As well, the ponds settle out suspended solids and discharge a cleaner effluent.”

Ultimately the Town is responsible for overseeing and approving proposed stormwater systems constructed in developments. The Town must also ensure that what is being constructed, is what was approved by the Town, said Mr. Simanovskis.

“Ultimately most stormwater systems become the property of the Town,” he said. “We have an obligation to provide long term maintenance and repair, to ensure ongoing performance.”

The community also has a role in protecting Lake Simcoe, by keeping contaminates out of the water system. For example, applying too much fertilizer to a lawn, which is then washed away during a storm, can increase nutrient levels in water bodies. This can contribute to algae blooms or organic growth problems said Mr. Simanovskis.

In addition, pet waste, detergents, chemicals and oils and general debris should all be collected and prevented from entering stormwater systems.
The Town of Aurora has hired Aquafor Beech Limited to complete the stormwater management study. It is inviting public input and comments until December 2013. Finalization of the project will occur in January 2014.